﻿Stamp News Board!﻿
Stamp News & Articles of Interest on Stamp Collecting and related articles
New - Great Britain, Major stamp Discovery
G.B. 2022 (8th March) The F.A. Cup - celebrating 150 years of the F.A. Cup - footballs oldest domestic trophy. Major New Error / Variety 'Black Triple Printed, 1st class sheetlet of 18 x 1st class ', showing a 'Strong and Apparent Trebling of the Black Colour to the naked eye!' This being most Dramatic & Pronounced, on the the top half of the sheetlet ,
but affecting all stamps to a greater or lesser degree.
Previously folded, vertically, down perforations, does not detract and mentioned for accuracy only. A couple of light handling bends, to the lower part of the sheet.
Purchased from a Barnsley Post Office by a lucky finder! - Please see all scans - 1 only -
-----------------------------Price on Application--------------------------------------------------------------------
Mistakes on stamps that make them worth a fortune.The most valuable thing on earth for its size is a stamp - but most are worthless. How should you invest? Gary Ashburn says the key to value is rarity, so hunt down something unique


Investors attracted to the Royal Mail share sale could look back in time to the legacy of stamps for an alternative return. And far from being dull, stamp collecting is complete with tales of murder, rivalry and scandal – as well as hapless human error.

There are estimated to be more than 30 million stamp collectors worldwide. And one particularly rare stamp, the Swedish Treskilling Yellow (which should have been green), is said to be the most valuable thing in existence by weight and volume: it last went up for auction three years ago with a price tag of £1.6m.

Sadly, treasured collections inherited from relatives are unlikely to be worth a fortune. Even the famous Penny Black is not a guarantee of a big return: millions were printed and they can change hands for as little as £20 – although a perfect one might sell for £30,000 or more.
money@telegraph.co.uk


1856 stamp, the only one of its kind known to exist, will be most valuable object by weight and size ever sold, says Sotheby's

The stamp is being sold by the estate of John du Pont, a chemical company heir who died aged 72 in 2010 in a Pennsylvania prison where he was serving a sentence for the 1996 shooting of an Olympic champion US wrestler, David Schultz.

Du Pont, whose wealth was estimated at $250m at the time of his 1997 trial, was one of the richest murder defendants in US history.

Sotheby's said experts from the Royal Philatelic Society London (RPSL) had re-authenticated the stamp, the only one of its kind known to exist, and it would be offered at auction in New York on 17 June.

"It is one inch by one and a quarter inches, it's tiny and when it sells it will be the most valuable object by weight and size ever sold," said David Redden, Sotheby's vice-chairman and director of special projects.

"Our estimate on this stamp is $10m to $20m. That seems like an awful lot, but in the great scheme of things, across the entire collecting world, the most extraordinary objects in every field, that price suddenly becomes a little modest."

Chris Harman, chairman of the RPSL's expert committee, said the stamp printed in what is now Guyana was without peer.

It has not been on public view since 1986, when it was exhibited at a stamp show in Chicago. The last time it was certified as authentic by the RPSL was in 1935, since when several attempts at forging it have been made.

The current auction record for a single stamp was set by the Treskilling Yellow in 1996 at 2.8m Swiss francs (then worth about $2.2m).

The one-cent magenta was printed in British Guiana in 1856 after a shipment of stamps from England was delayed, which threatened to disrupt postal services throughout the colony.

The sole surviving example of the one-cent was first rediscovered not far from where it was initially purchased. In 1873, L Vernon Vaughan, a 12-year-old Scottish schoolboy living with his family in British Guiana, found the stamp among a group of family papers bearing many British Guiana issues.

A budding stamp collector, Vaughan added it to his album and later sold the stamp to another collector in British Guiana. It entered Britain in 1878, and shortly after that it was purchased by Count Philippe la Renotiere von Ferrary, one of the greatest stamp collectors in history.

France seized his collection, which had been donated to the Postmuseum in Berlin, as part of the war reparations due from Germany, and sold the stamp in 1922. It changed hands several more times before Du Pont, an avid philatelist, paid $935,000 for the stamp at auction in 1980. 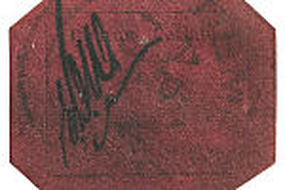 In philately, "errors, freaks, and oddities" or "EFO" refers to all the kinds of things that can go wrong when producing postage stamps. It encompasses everything from major design errors to stamps that are just poorly printed, and includes both some of the most sought-after and expensive of all stamps, and others that attract the attention of only a few specialists.

Postal authorities generally take some care to ensure that mistakes do not get out of the printing plant; to be valid, the EFO stamps must have been sold to a customer. Mistakes smuggled out by unscrupulous employees are called printer's waste, not recognized as legitimate stamps, and may be confiscated from collectors; the Nixon invert is a well-known recent example of an apparent new error that turned out to be simple theft by insiders. The authorities may attempt to lay hands on legitimately-sold errors, as happened with the original Inverted Jenny sheet, but usually collectors are smart enough to hang on to the windfall.

Errors[edit]A postage stamp error is any of several types of failure in the stamp printing process that results in stamps not having the intended appearance. Errors include use of the wrong colors, wrong denominations, missing parts of the design, misplaced or inverted design elements, etc. The term "error" is typically reserved for obvious failures in the production process that (potentially) replicate over many stamps; unique errors or poor quality known as are . Printing plate flaws, such as cracks, wear, or even constant flaws, and plate repairs, such as re-entries, are also not considered errors.

Genuine errors are uncommon or even rare; postal administrations have several layers of quality control and inspection, and most printing problems are addressed before the stamps ever reach the public. A particular error may only exist in a few dozen copies, and some well-known errors, such as the Treskilling Yellow, are unique (so far as we know). They are prized by collectors, with some fetching prices thousands of times higher than the normal stamp of their type.

Errors are known at every stage of production, starting from design, to engraving, to replication of the die, to printing itself, and to perforation. (In theory gumming errors are possible, in practice used stamps have no gum, so any error would become undetectable).

The following is a list of the major types of errors.


Freaks[edit]A freak is a one-time mishap in the production process. Freaks include paper folds resulting in half-printed half-blank stamps, "crazy perfs" running diagonally across stamps, and insects embedded in stamps, underneath the ink.

Oddities[edit]An oddity is something that is within the bounds of usability for the stamp, but still has a distinctive appearance. The usual sort of oddity is misregistration on a multi-colored stamp, which can result in shirts apparently with two sets of buttons, eyes above the top of a person's head, and so forth. These can be extremely common. The Canadian Christmas stamp of 1898, depicting a map of the world with British possessions in red, is famous for unusual color oddities that appear to claim all of Europe, or the United States, or central Asia for Britain.

References[edit]   External links[edit]Wikimedia Commons has media related to Stamp oddities and errors.
Categories:
Where to Find A $14,000 Error Stamp Rarity    By John Finch

You can see it at Stamp Auction Central, a newly discovered rarity that has stood the stamp collecting world on its head. It is a double impression (basically the design printed twice) of the 10 cent Lindbergh stamp of 1927. The auction description adds an element of excitement to our quiet philatelic world when it states that the stamp "is the only example recorded to date but since the issue was printed in sheets of 200 before being broken into panes of 50 there are likely more hidden away waiting to be discovered..."

Stamp Collecting's Continuing ExcitementWhile some jaded collectors think that all the great discoveries have been made, this is an example of why the hobby of stamp collecting is constantly refreshing itself, as rarities can still surface after many years of hiding in an album or a box. In fact, some of the greatest discovers are possibly still to be made: the hobby only dates back to the 1840's. Those who created the earliest collections could have handed them down to their offspring in 1900, or possibly later. And they in turn might have held them until the fifties or sixties. The next in the line of inheritance brings us to today. That's only four generations of collectors. My guess is there's still a lot to be found.

But without a doubt, this rarity sent many collectors scurrying to their albums to see it they had a copy that they hadn't noticed. Of course there is also the possibility that a number of these stamps appear on airmail covers -- perhaps even those of a single flight. A cover servicer might have bought up a large number of the stamps to service his covers and in the rush to get them on the flight missed the fact that there was something different about the stamps he purchased. After all, it is not nearly as dramatic an error stamp as the Inverted Jenny. I know that theory is somewhat far out, but where are the other 199 errors?

Classic Airmail Stamps and CoversIt is interesting because there are so many covers with the Lindbergh stamp (Scott Cat. #C10; the newly found error is #C10b) that checking every one is obviously an impossible task. (When I once spoke to Charles Lindbergh's daughter, author Reeve, mentioning the philatelic part of her father's life, she rolled her eyes when she spoke of boxes of "those covers" that seemed to show up frequently at the Lindbergh home.) What if they did in fact wind up franking a first flight cover that collectors at the time dutifully added to their collections to sit for decades? If one of these is found on a cover you can be sure that cover boxes at stamp shows and shops will be examined to a microscopic degree.

Now is the time to go to online auctions: collectors of classic airmail covers are again to the point that they are selling off their collections on eBay etc. It is not morbid or exploitative to try to get an interesting cover that may have snuck under the collector's radar.

The Stamp Collector's DilemmaLike the Lindbergh stamp that sat hidden away, undiscovered in a collection for decades, there are many covers, airmail and otherwise, whose values might not be known by the collector now selling them. Of course, the charitable thing to do would be to contact the collector-seller, to let him know he's undervaluing an item he's selling. That would be a very humanitarian thing to do. But it wouldn't necessarily be a collector's thing to do.

It's an ancient debate: point out the "error" to the seller and let him adjust the price (this is usually done by those who have no interest in the area and no intention in trying to buy the item). Or, buy the underpriced item and realize a profit of your own when you go to sell. When talking about a $14,000 stamp, deciding the way to go entails at least a second thought - maybe even a third or forth.